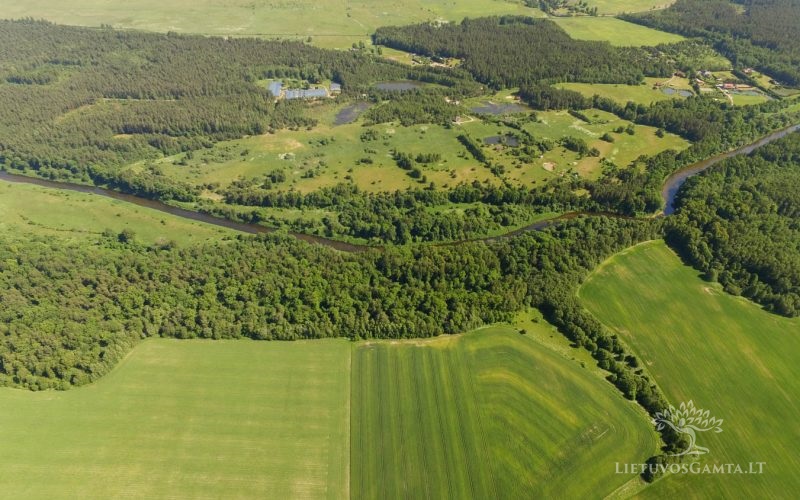 Dovilai Castle Hill is situated in Klaipeda district. The olde people used to call it Pelute Hill or Maskalnis. It is said that many years ago, when attacks of men in an iron armour against our land were a common thing, there was a durable castle on the hill. The castle was ruled by a brave Duke Dovilanas. […] Once, when enemies attacked his lands and started robbing people, Dovilanas gathetered together a lot strong men to form his troops and left to fight against the entrants. Even though the warriors of Dovilanas thought bravely and hard, they could not withstand the forces of the enemy that were too powerful: they all returned home and locked themselves together with all their riches in the castle. After arriving the enemy began attacks against the castle. […] Then Dovilanas smashed a sacred Pagan altar with his sword and broke it is small pieces. At the same moment he smashed the altar, Dovilanas put a curse on the enemy and the castle. The castle slowly descended under the ground and only the castle hill remained in that place. The troops of the enemy were terrified and quickly retrieved to their lands. On the way home they were attacked by another ruler accompanied with his troops and they all were killed.

Did you know that there was a hole at the top of this hill and the people who returned from the hole after visiting it could not tell others about the things they saw inside that hole? The youngest shepherd got down once into that hole. […] The cave inside the hole was spacious and tall enough for the shepherd to walk at full-height. After a while the boy had reached the sheeny gate. […] Shortly after that the gate opened and the old grey-haired man showed up. The old man took the child inside and gave him the most delicious meal. The shepherd […] understood that he is in the palace. Everything was clearly visible as if in the daylight. All things around shined in gold and silver. There were warriors walking around the palace. They were dressed in animal fur, and had swords hanging by the side. […] Later the old man let the boy go, but placed the child under oath not to tell anyone about the things he saw down here. The little shepherd climbed up the cave. Suddenly, he started rising up and felt himself standing on the hill. […] Later others started asking him what had the by seen down there in the cave. The little shepherd did not want to tell others about his experiences in the cave and told that he was banned from telling anything. But eventually he could not resist temptation and told everything to other people, and immediately lost the ability to speak.

Dovilai Castle Hill that is overgrown with forest is also called Gedminiai Mound. It is situated close to the River Minija that flows nearby. A perfect place for the horses to drink! A magnificent castle stood on the hill in the 13th century, but no traces of the hill survived into the present day. But you can still find here the shooting nests of concrete that were used by Germans as a defensive fighting position during the World War.