Kernave Mound III with a settlement 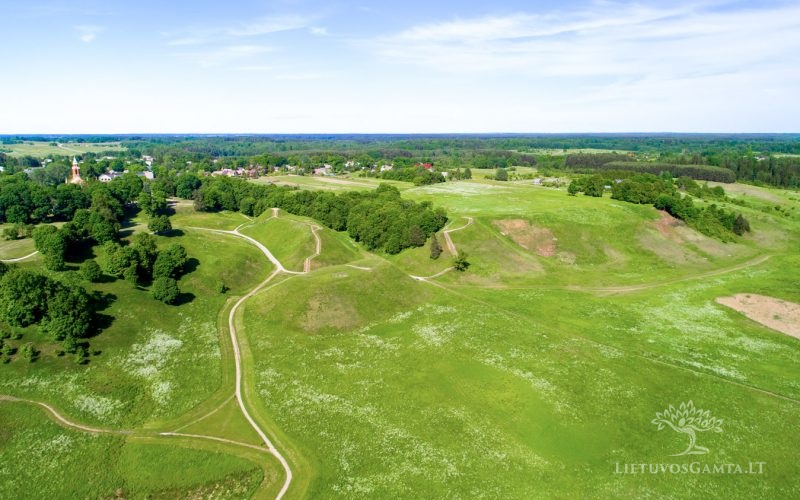 Kernave Mound III is an outwork of Aukuras Mound that was used in the 13th-14th centuries. It is also called by the old people Lizdeika Hill, after the chief and last Pagan oracle. The one who interpreted the dream of Gediminas, the Grand Duke, about an iron wolf. The temple of god Perkunas was demolished after the introduction of Christianity in Vilnius and Lizdeika moved to Kernave. Evidently, this is why the hill was named after Lizdeika. And probably just because people felt great respect for the oracle, because, according to the old people, most of the time he stoked a holy fire on Aukuras Hill, not on this one…

The hill is pretty pointy. For his reason, it is also called Smailiakalnis (from Lithuanian word “smailas” which means pointy) by the locals. The same old people remember that the hill much longer served for the needs of the people. According to them there was a hideout that was used by the people of the Middle Iron Age.

In the times of prosperity of Kernave, Lizdeika Hill had to defend the main castle. But there are no doubts that people lived there too. And there was a settlement that was situated in the foothill of the mound. Wooden houses probably stood here, and they all were surrounded with a wooden defensive fence. Who knows, maybe there also was a small castle in the middle of the courtyard… But no buildings of those times have survived into the present. They had all been probably destroyed by the fire.

Not only the old people, but also the items of the contemporary everyday life, such as jewellery, brass sheathing, fragments of ceramics, and even slag formations used by blacksmiths, that were found in the site, are the witnesses of the life on the hill! The stones affected by fire, that were arranged in circle, are an exclusive archaeological find. Maybe a sacred Pagan altar stood here, or maybe some great man is buried inside the hill… Only one thing is clear: nobody worked farm works on this hill. It is said that its site is too small and nobody would fit there.

However, today Lizdeika Hill is the real treasure chest! The hill was little explored until now: even though only few archaeological excavations took place in the site, but the scientist managed to find numerous items! Who knows what secrets of the old Grand Duchy of Lithuania keeps the serene Smailiakalnis hill…