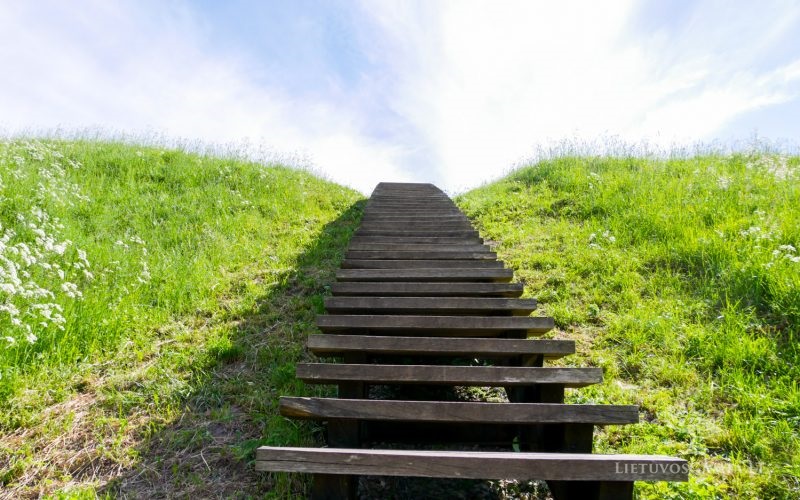 Aukuras Mound, the most significant of all Kernave Mounds, is also called Barsciai Hill by the old people. Even though it is the lowest of all hills, it managed to carry many fortresses on its back and suffered numerous fires! Many important historical events and personalities of our state are associated with this place.

It is believed that a hardly accessible courtyard surrounded with wooden walls to ensure its protection was here in the first centuries of our era. The wooden houses that stood here gave start to the development of Kernave. After the farmstead had burned down, a new house was probably built in its place in the 4th century. But it also ceased to exist very soon: the nomads, who came here, pelleted the house with their arrows and set the house of fire before retrieting. It was a severe disaster because the human and animal bones were found in the site where the fire had occurred.

The old people remember that before the christening of Lithuania people gathered together on the hill to participate in the sacred rite. And there is no wonder, since Kernave was Lithuanian centre of pagan worship! Priesstresses stoked a holy fire on Aukuras Hill before the death of the chief oracle, and standing on the hill Lizdeika preached and interpreted the dreams of the people. And probably for this reason the hill is also called Aukuras Hill and Sacred Hill.

The old people remember that later a wooden Kernave Castle stood on the hill in the 13th-14th centuries. The castle had a really well developed infrastructure of defense – with the outworks in Mindaugas Throne and Lizdeika Hill mounds. And there is no wonder because the fortress formerly was one of the most important castles of Lithuanian rulers.

The contemporary site of the castle hill was surrounded on the edges with a wooden wall supported with the poles. The residues of the wooden buildings survived well into the present in the damp soil. Castle Hill, both in the elevations and in the damp Pajauta valley, up to the River Neris, was surrounded with a huge settlement that was situated in the foothill. It was even called a town!

The surroundings of Kernave were attacked by the Teutonic Order in 1279. Nearly a century later, the castle was seized by Butautas, the son of the Grand Duke Kestutis, who marched from Vilnius together with the troops of the Teutonic Order. His troops had pelleted the fortress from the side of the valley with the arrows that were let off with help of their crossbows and arches. More than thirty arrowheads that were found in the site are reminiscent of this attack. Vygandas (baptized Alexander), the brother of Jogaila, was the Duke of Kernave at the end of the 14th century.

Who ever ruled Kernave, the people of the castle had always defend themselves and the castle against the enemy attacks. The arms such as javelin heads made of iron, a fragment of a chain mail and a part of a sword that were found under a turf of the castle hill are the witnesses of this fact. Despite frequent battles, there is no doubt that the Dukes resided in the castle. Surely, no one else, except the contemporary noblemen, could drink wine and mead from the glasses that were made by the craftsmen of the Middle East…

The defenders of Kernave Castle had set fire on the castle in 1390. The locals did not want the castle to be seized by the troops of the Teutonic Order fighting in alliance with the army of Vytautas, the Grand Duke of Lithuania, who headed towards the castle. This was the end of the era of fortresses as no other castle has ever been built on Aukuras Hill in the place of the one that was burned down.