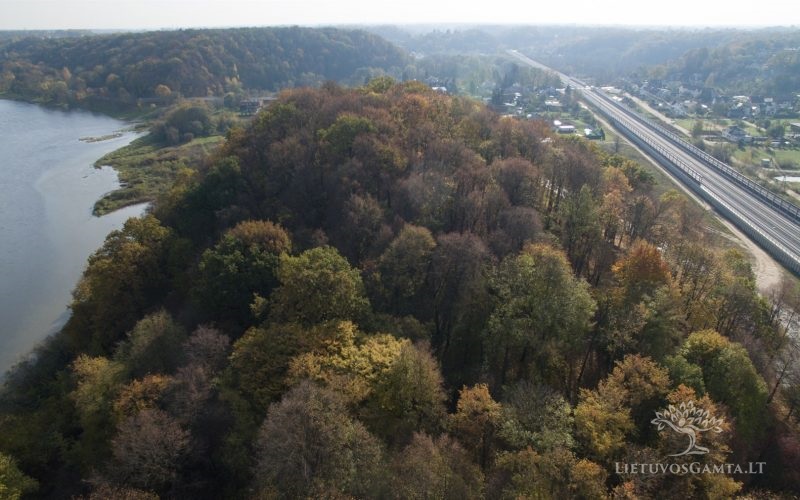 Jiesias Mound is a 63,6 m high historical object of pride, also known as Napoleon Hill. The mound is situated at the confluence of the rivers Jiesia and Nemunas. The old people used to tell in the past that the ground was very wet in Piliunai when this French Emperor passed through Lithuania with his troops. And at that time there were a lot of his troops who wanted to take a break in order to have a meal and to relax. But they could not find a dry place. And suddenly they started carrying a soil with their hands or hats, and soon had built a hill that was comfortable and soft for sitting and having a meal.

This is precisely the hill on which the French Emperor was standing while watching his Great Army (in French Grande Armee) crossing the River Nemunas on 24 June 1812. Three pontoon floating bridges were built over the river. All Napoleon military forces used these three bridges to get across to the territory of the contemporary Russian Empire. This operation is considered to be one of the most successful histories in the military context on a world scale. It is interesting that none of nearly 60 thousand military men of infantry and cavalry suffered harm while crossing the river. The military men of artillery had also successfully crossed the River Nemunas.

The castle hill, which is also called Pajiesis Mound, is many centuries old. It is believed that the castle of the mound, forming a part of Kaunas Defence Line, was built in the 14th-17th centuries. There was a settlement at the foot of the hill: people did their daily works, the horses drank water from the River Nemunas. Various specimens of pottery with a rough surface and specimens of pottery made with help of a rotating pottery loom as well as a brass ring that were found at the site are the witnesses of this living history.

Today you will not find a castle at the top of Jiesia Mound, but will have a great opportunity of seeing a picturesque Kaunas city panorama from the hill that overlooks it. Ancient feasts of Balts are often celebrated in the observation deck of the mound.