Mastaiciai Mound with outworks, an outer bailey and an old port 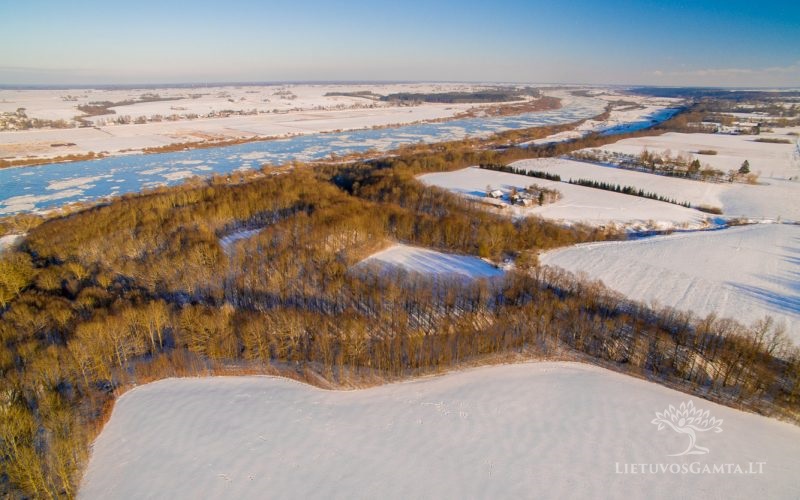 A great complex that is reminiscent of ancient battles is situated in Mastaiciai village of Sakiai district, very close to the River Nemunas. Not only a castle hill stems to the sky, but also two outworks with an outer bailey are here. A landing stage and ship mooring excavation overgrown with sludge is also situated nearby. It witnesses that an important ancient port formerly existed near the fortress. New Bajerburg Castle of the Teutonic Order stood on Mastaiciai Hill in the 14th century. The fortress was once attacked by fierce Lithuanians who were led by Kaributas: they pulled down lots of trees into the ditches that surrounded the fortress and wanted to burn an outwork. As the warriors defending the outwork could not withstand attacks of the enemy, they set the fire on an outwork by themselves. Flames leaped at the tower of the castle. The palace immediately turned into a heap of smoking rubble and not even the smallest hint about the power that formerly existed in this place can be found here today. Other people say that not New Bajerburg Castle, but Christmemel Castle or even Mastas Castle stood here. It is hard to say what is the real true.

According to the old people, there is a sunken castle inside the mound. The princesses formerly lived in the castle. There is a hole in the hill with a hidden gold, and a secret tunnel that leads from the mound to the River Nemunas and then it goes under the river to Skirsnemune village that is located on the opposite bank.

Who knows, maybe precisely the hidden treasures are the true reason why the locals tried to defend the fortress so hard: the stern watchers guarded the castle in the outworks, while craftsmen and merchants scurried about in the outer bailey. There is no wonder that the locals found it necessary to establish an old port in the outskirts of the valley of the River Nemunas: they could comfortably travel by ships on the river, and they also probably were successful in trade.

Not only in the ancient times great feasts were taking place in the surroundings of the castle. Before the World War I, Mastaiciai-Narkunai mound was famous in the entire neighbourhood for outings that were organised at the end of June by the upper class of Kaunas. Even the governor participated in those famous outings. Soldiers were the first to arrive in order to prepare a site of the mound, to install benches and tables, and to level a dancing ground before the arrival of the governor. Then two steamboats, accompanied by the military orchestra, used to arrive from Kaunas on Sundays bringing the guests to the feast. This orchestra also played for the dancers, and the sound of the orchestra could be heard well on the banks of the River Nemunas and in the neighbourhood villages. A lot of military men and civilians used to gather here, and they all danced, sang and had a wine and dine. The locals used to gather in the nearby outwork and they danced under the same music. The feast lasted until the sunset…