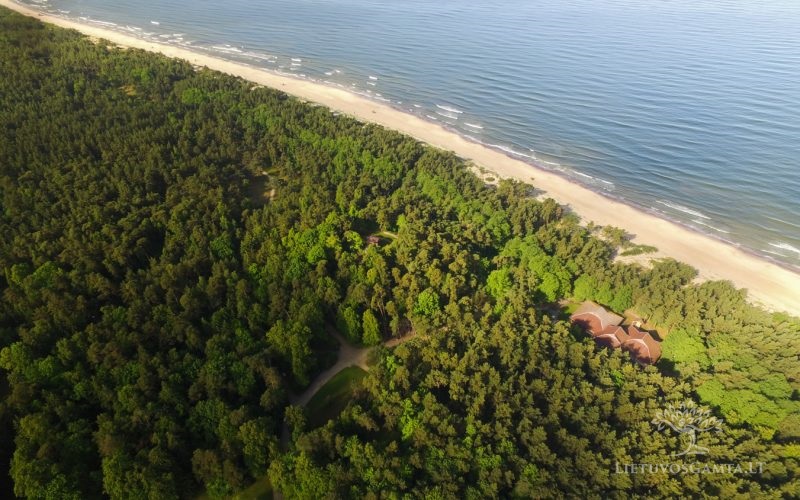 Palanga Castle Hill overgrown with a pine forest is situated in the same place where today‘s Birute Park is located. Palanga fortress stood on the hill in the distant past: in June of 1161 the hill was attacked by Danes, but one century later it again belonged to the Curonians.

The old people remember that two settlements were situated in the foothill of the mound, and one of them was surrounded with a dyke with a shape of a horseshoe that was made of sand. This beautiful coastal area of the Baltic Sea was a good place for people to live. But they always had to defend themselves against the enemies who used to come here by their boats sailed in the open waters of the sea. The arrowheads and a spear with sheath that were found in the sand are reminiscent of this fact.

The local men, who wore brass rings, clinched the boats and were selling amber to the foreigners for silver money, while the local women, who wore brooches with a shape of a horseshoe, did household chores: they twined yarns on spindles or cooked fish in ceramic bowls and pots. The people usually lived in the wooden houses, but also built houses with clay walls and reed roofs. The latter element is still called a standard of the architecture of the coastal region! The people of Palanga not only lived comfortably by the sea, but also could curiously observe the life of the castle hill.

It is said that a temple-observatory stood on the castle hill. Its primary purpose was to observe the movement of the Sun and the Moon, and carry out calendar measurements. A priestess Birute stoked a holy fire in the sanctuary. She was later taken by force by Kestutis, the Grand Duke of Lithuania, who married her. Kestutis, who ruled Trakai and Samogitia, heard about a maiden named Birute who lived in Palanga. She sworn to gods according to Pagan customs that she will keep her virginity and people worshiped her as goddess. Kestutis went to Palanga and he liked Birute very much because she was a very beautiful and clever girl. And Kestutis proposed marriage to Birute. She did not want to agree and refused to marry Kestutis because she promised her gods that she will keep her virginity until the end of her days. Then Kestutis took her by force from that place and with great respect escorted her to Trakai, the contemporary capital of Lithuania. And he summoned his brothers to celebrate the solemn wedding during which he married that maiden named Birute. No one will ever tell if the priestess was happy or not living in the marriage with Kestutis. However, she later returned to her birthplace: it is said that she is buried somewhere on the castle hill.

The people remembered with great gratitude the goodness and kindness of that Duchess after her death and worshiped her as goddess. Even when a new religion dominated in Samogitia and the people no longer worshiped pagan gods, the ordinary people continued considering Birute as goddess.

After Samogitian baptism in 1413 the old Pagan temple was burned down.

A sacred Pagan altar of Birute has not survived into the present. And there are no signs that it ever existed. Only a modest […] sculpture of Birute stands in the foothill of the mound…