Vieskunai Mound of a mound with a settlement 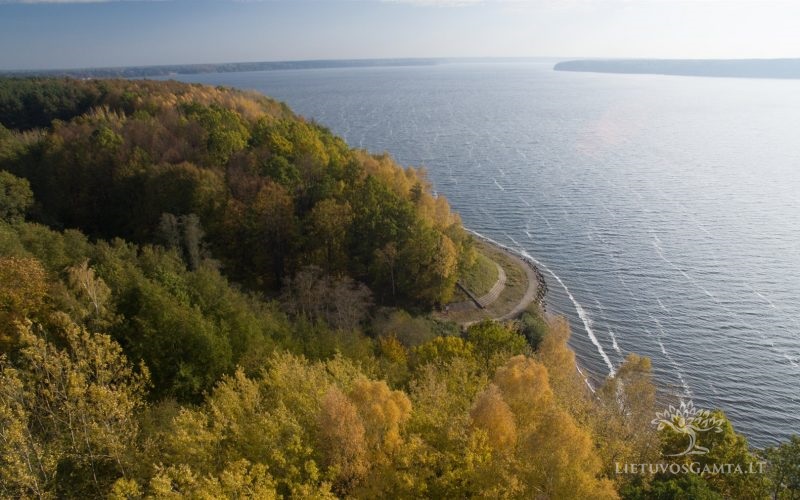 A very old castle hill is situated between Pazaislis Monastery and the Valley of nightingale. Here, where today Kaunas Lagoon lies, formerly the River Nemunas flowed in the beautiful valley. To some people the bight of the old river, that was well visible from all sides, was alike “a public elbow”. And the name of Vieskunai Mound originated from this association. The hill is also called Suneliskiai Hill. The name derives from a word dog. Once the daughter of the local landlord committed suicide on the mound. Since then this place is haunted. Bird chirp or the howl of the beasts can be heard here during the night. But mostly various dogs running out of a ditch show up here as ghosts. The name of the hill originated from those dogs. Who knows, maybe there is some palace sunken inside the hill. Just no one is no longer afraid of the howl of the dogs inside there…

A wooden castle, that formed a part of Kaunas defense circle, stood on Vieskunai mound in the 14th century. The fortifications of the castle were very firm because they had to withstand attacks of the enemy against Kaunas Castle of masonry from the south-east side! There was an old settlement in the foothill of the mound. The locals had time to admire the picturesque surroundings, but most of the time they worked for the sake of defense of their land: they minted arrowheads, sharpened knives, and drank mead from a clay vessel when they wanted to relax.

Later, when the wooden castle ceased to exist on the hill, nobody lived there anymore: all the locals friendly moved to the valley of the River Nemunas, which is currently buried under the water of Kaunas Lagoon. By the way, in the outskirts of the settlement, on one side, there is an unnamed streamlet that flows into a streamlet of Suneliskiai Distch. It is believed that there had to be a site of graves of those times.

Neither the valley could be found nor remains of the fortress can be unearthed today. There is no doubt that you will not give up the opportunity to climb on the mound and to admire a beautiful panorama of Kaunas. Especially because the hill has been cleared of redundant trees and bushes, and has all necessary infrastructure: a slope of the mound has been restored and reinforced, stairs have been installed, and a monument in the memory of all mounds that are buried under the water of Kaunas Lagoon was erected.