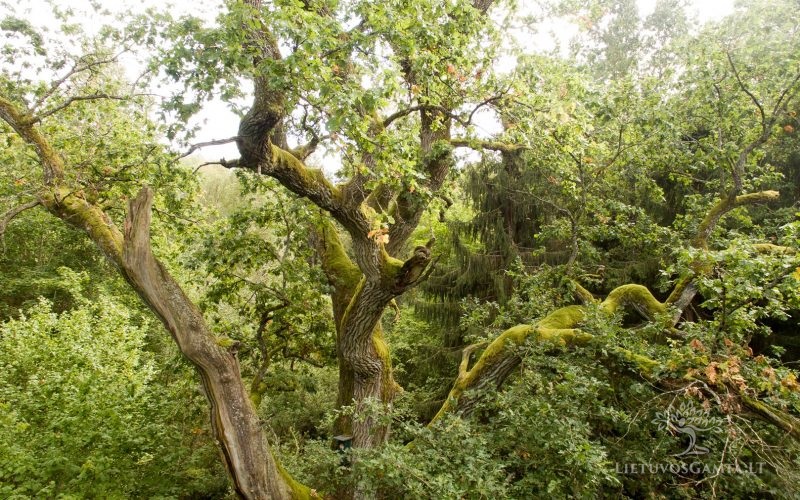 The oak of Alkūnai, growing in the district of Molėtai, was named after the name of the forest. The forest of Baliūniškis used to be called the forest of Alkūnai once. The trunk of this impressive oak is so thick that even if ten men are to stand around it to clasp their hands, they could barely touch each other’s fingers. The extent of the trunk is almost seven meters. The thickness of the oak once saved it from the woodcutters. The oak, as many other old trees, was supposed to be cut down for logs before the First World War. However, as hard as they tried to find a proper saw to handle such a trunk, none was found.

A mighty oak of 28 meters had suffered from the lightning and fought the storms time and time again. The tree covered in scars and wounds used to become a shelter for people from various natural disasters. The ancestors tell this story: once I was riding a bike and a rain came over, so I turned off the road and got into this hole with the bike, the rain fall down and I stand in the oak.

After a long while people supposedly have seen the Saint Mary at the tree. Others saw a walking old man or the God himself. People used to come to pray by the oak until the middle of the 20th century. Priests used to come here, and an image of the Saint Mary used to be hung on the tree. Entertainments used to begin by the old mighty in the evenings. Whenever there’s a good weather, everyone goes to the oak. There’s enough space to dance and make a fire. It’s been said that this oak has at least eight hundred years. The youth from all around used to gather to the May Feast, even the old ones used to come to watch the dancing. Dancing took place by the tree time and time again.

The long-lived oak might be found in the forest of Baliūniškis, in the district of Molėtai.