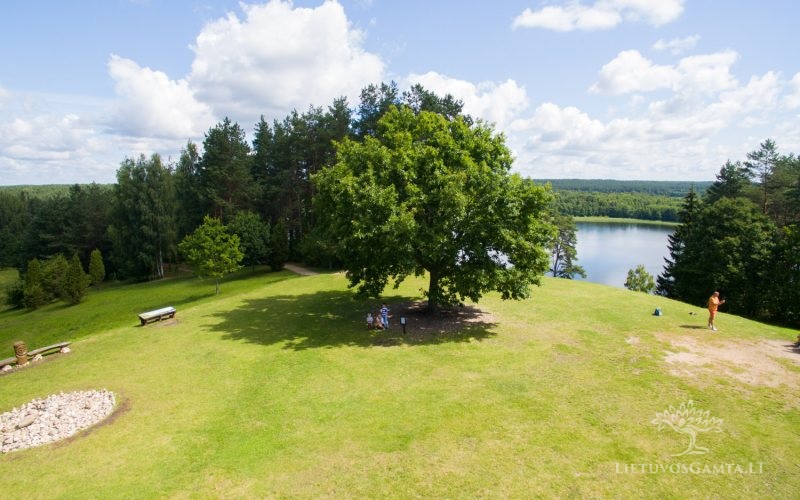 Searching for pebbles or stones at the foot of Ladakalnis, located in Ignalina district, may take a while and some digging. It’s because all of the largest ones are already picked. People believe that you can’t climb this hill empty-handed and should bring at least one pebble to the top. You leave it at the oak, growing there. Once, Ladakalnis was an ancient Baltic sanctuary. At the top of the hill people used to make sacrifice to Lada – the great mother and goddess of life. The forest was named after her. The sacrifice in money or food items is now replaced with simple pebbles and stones. Bringing one up you may hope for your deepest desires or forgiveness of sins from the goddess of life.

You should pick your stones carefully. The bigger the stone, the bigger your wish may be. The more pebbles you bring, the more of your dreams will come true. Just be careful to calculate your capabilities so that you wouldn’t come short of energy, climbing the three hundred steps with your pockets full of stones.

The 175 m top of Ladakalnis opens views to as many as 6 lakes. On a sunny day you can see the lakes Ūkojas, Linkmenas, Pakasas, Asėkas, Alksnaitis and Alksnas. Just like Ladakalnis, some of them have their own legends. A bay of Lake Alksnas is referred to as Mergakumpis. There is a tale of the girls from the village, who tried to swim across this bay in an attempt to escape the Napoleon troops and drowned.