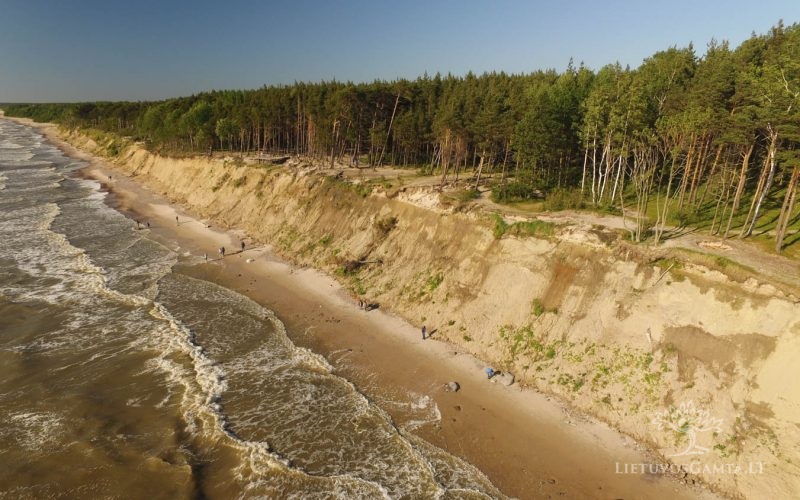 Overgrown with pines and oaks, the Dutchman’s Cap scarp is clearly visible in the even sandy landscape and used to serve as a landmark for sailors fighting waves in the sea or fishermen, pulling out their catch since the old days.

Looking from the sea, the shape of the scarp is reminiscent of a Dutch fishing cap. Dutch merchants, who lived in Turlakas village (later known as Tauralaukis Manor), stretching on a wide strip of the seaside from the Dutchman’s cap to the northern part of Klaipėda city, and sailors came up with that name.

Many years ago a Dutch sailor’s cap was washed upon the shore here and thus this name stuck to this place ever since. It was only sailors, who referred to the scarp as the Dutchman’s Cap for a while. Locals knew this territory as Melmužė, which means ‘a black forest’ in Latvian.

The height of the Dutchman’s Cap is nearly 25 metres. This is the only place at the Lithuanian seaside that is so steep. According to calculations, the scarp was formed 12-15 thousand years ago by drifting glaciers. Currently this place is intensively corroded by the sea. The entire shore along the Dutchman’s Cap is dotted with large and small boulders, washed from the scarp by the sea.
The high scarp is convenient for watching not only flying water birds – Steller’s Eider, Common Goldeneye or mergansers. In the nearby meadows you can meet cranes, while in the forests – foxes, deer or even moose. Seals occasionally poke their heads out of the water here as well.