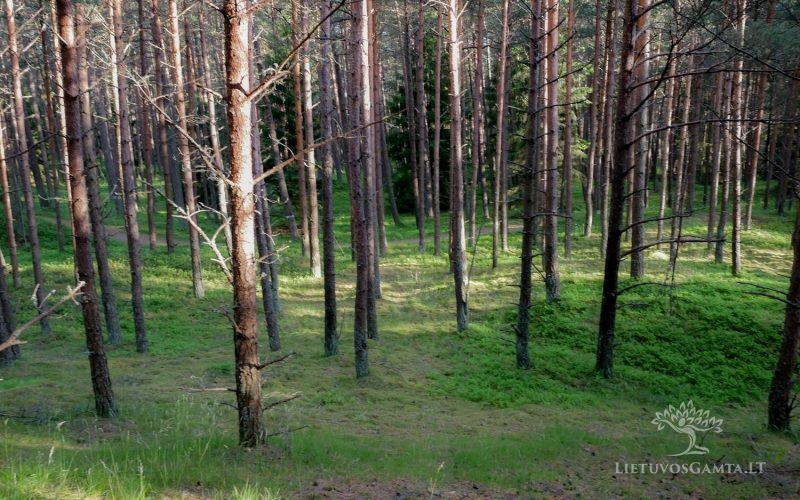 Since the old days this hill was liked not only by people, but also devils and witches, who used to hold their feasts there. Even the goddess Ragė herself used to visit the annual gatherings during the shortest nights of the year. Their gatherings must have been so noisy that the hill was named as the Hill of Witches.

This was the favourite place for celebrations and various charms not only by witches, but also local people, who used to gather to celebrate St John’s day for many years. Participants of the celebration used to roam all over the hill, trying their luck at finding the lucky fern flower. Back in the day the hill was called John’s Hill.

The name of the Hill of Witches stuck to the parabolic dune of Juodkrantė again, when its slopes were gradually overgrown with sculptures, reminiscent of the feasts, held by the devils and witches, mentioned in the legends. The exposition of the wooden sculptures on the hill in Juodkrantė has been started back in 1979. Everyone starting their hike up the hill is greeted by the sea hag, holding an axe, with its bit pointing forwards. In the old days local fishermen used to do that to protect themselves against the dangers in the sea and the lagoon.

As you hike upwards, the 42 m hill gets as if divided into two. On the wide path of the sunny side you will meet various faery tale characters: Eglė, the Queen of Grass-snakes, the brothers, turned into ravens and the fisherman Kastytis.

As you continue onwards, the shade increases, the hill becomes darker and the path – narrower. Here you will see devils and witches – even Lucifer, the King of Hell himself – and dragons. No matter what they would be up to, all tricks and charms will be dissolved as soon as you pass the sculpture of a crowing rooster.