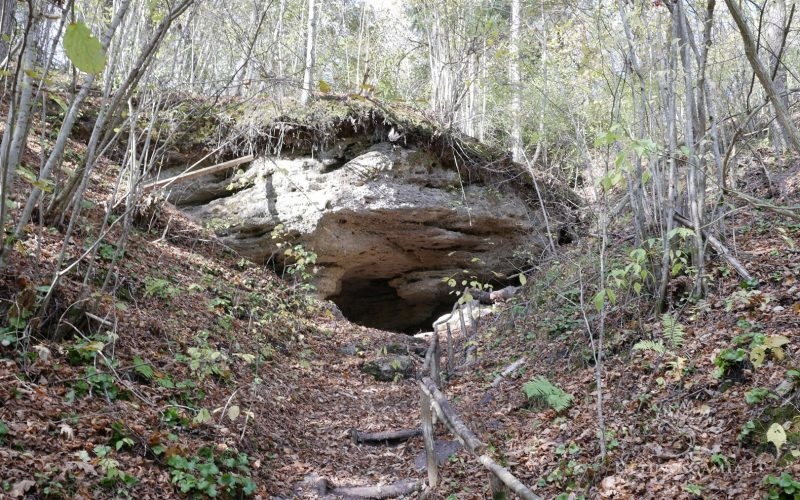 Many myths and legends originated around the rock at Skališkės; it was a place of attraction for pilgrims and the sick who tend to believe in miraculous powers of places.  A straight road lead past this rock all the way to the Gate of Dawn in Vilnius. In the 19th century, a chapel or a large cross was built on the rock. Pilgrims often stopped to pray at this scenic site. They gave the place the name of a Holy Rock.

While some would pray, others tried to scoop spring water dripping from the rock. Owing to the dripping water, the place was also called a Crying Rock. The dripping water of the rock of Skališkės has healing powers – it heals ailing eyes. When one would wet the eyes with that water, all eye illnesses disappeared and the world opened in brighter colours. These magic powers, however, disappeared when a rich woman arrived and washed the eyes of her doggie with the rock water. The water stopped aiding people.

The magic powers protected the rock itself.  A rafter, drawn by curiosity, tried to break apart a piece of the rock and take along, but his raft started sinking and he could not approach the rock.

The conglomerate rock formed on the right bank of the Neris River was formed with the melting of glaciers, when sediments were cemented into a solid piece of gravel. The layers of gravel inside the rock are clearly displayed. The place abounds in springs, too. Their filtering waters washed out soil from underneath the rock and formed a cave. It is almost three meter high and around six meter deep. Inside the cave one can still find remains of burnt candles, pictures of saints and rosaries brought there by people.

The spring water keeps dripping from the Crying Rock during summertime. The drops filter through the walls of the cave, too. In winter, they turn into fabulous ice-cycles in freezing temperatures, into stalactites and stalagmites.  In places where most water gets through, the dripstones are really thick.