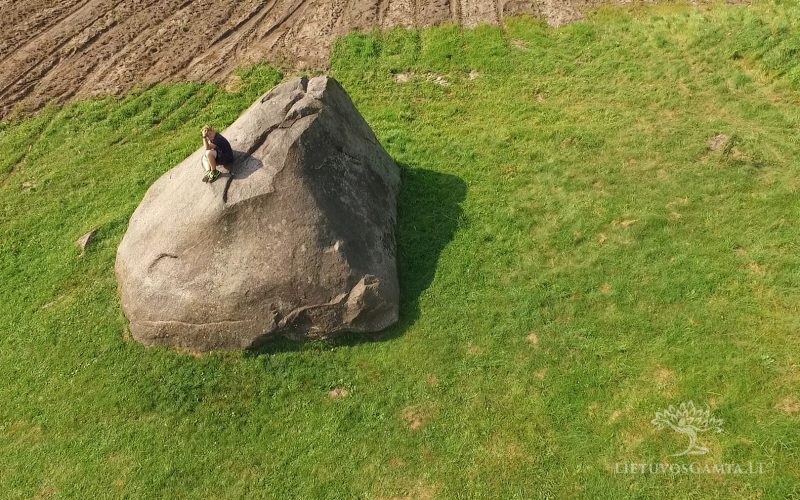 Each stone is specific and unique: features the distinctiveness of colour and relief. Have you ever seen a stone with lots of indentations? One of them is the stone of Švendubrė, also called as the Devil‘s Stone.

The Švendubrė stone was carried by a devil. He wanted to carry it to the other side of Nemunas. He wished to complete the castle at Liškiava. Masonry on bottom and sand on the top. A rooster crowed and the he dropped the stone. The stone wasn’t there, but come the morning – there it was.

Wanting to cause harm to the people and the harvest, the devils would carry a bag of stones and would scatter them across the cultivated fields. It appears that it was a pleasure for the devils to carry stones.

When God created the earth, there were stones everywhere. Then God called the devils to collect those stones and carry them to the sea. And so the little devils kept collecting them.

Švendubrė stone is sacred to Lithuanians. Its surface is dotted with small indentations-bowls. The elder say that the water accumulating there is magical and has healing properties. People would drink such water as a cure, would wash their wounds and bruises with it.

In the middle of the XIX century, the stone was going to be split and used for the construction of Druskininkai, later Ratnyčia, church. However, the locals kept this stone sacred and did not allow destroying it. This event was described in the notes of Lithuanian prosaist and playwright Vincas Krėvė Mickevičius:

They wanted to split that stone. When they built the church of Ratnyčia, but the people wouldn’t allow it to happen, since it was thought to be sacred <…> People say that on that stone bishops would hold Mass.

The Devil’s Stone is in the top ten of Lithuania’s largest stones. It looms in the village of Švendubrė, Druskininkai municipality.

The diameter of the stone at the ground level reaches up to 19,7 m. and height from the ground measures about 3 m.