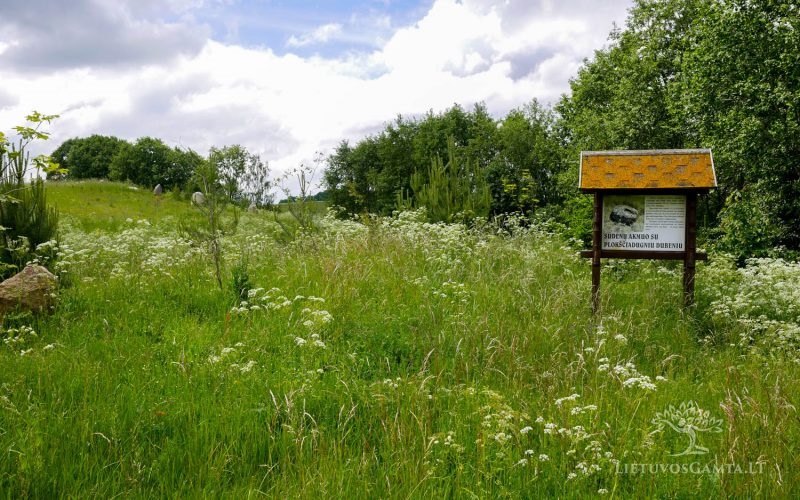 Stone is precious to a Lithuanian. One keeps the hidden treasure, the others are haunted by devils, witches, the wicked dead and the water in their indentations is magical and healing. The Sūdėnai stone remembers the pagan times. The eternal flame dedicated to the lord of the heavens, Perkūnas, was tended on it. He was offered the sacrifices of grain, bread, eggs, goods of the forest, money. In return they would ask for rain and a better harvest. The old one, having lived past paganism, could tell a lot of stories. It is thought that a lot of heads were rolled on this stone.

In the old days, the serfs, who could not work, were decapitated on this stone. And indentation was made in the stone especially for this purpose.

Now, standing here at the Sūdėnai stone with a flat-bottomed bowl, one can only guess of the events of the past. Especially when people say that they have seen “A fire burning and thinking money was burnt”, others – “that the stone is the millstone of the old mill house”, which was standing on the right shoreline of Kulšė river on the XIX-XX.

The Sūdėnai bowl stone is 1 meter and 25 centimetres in diameter, rising almost a meter above ground. A flat-bottomed bowl is near the centre of the top surface. With a little groove of 15-20 cm in width and 1 cm of depth along the bowel. The Sūdėnai bowl stone can be found in Žemaitinja – district of Kretinga, on the right shore of the Kulšė river.