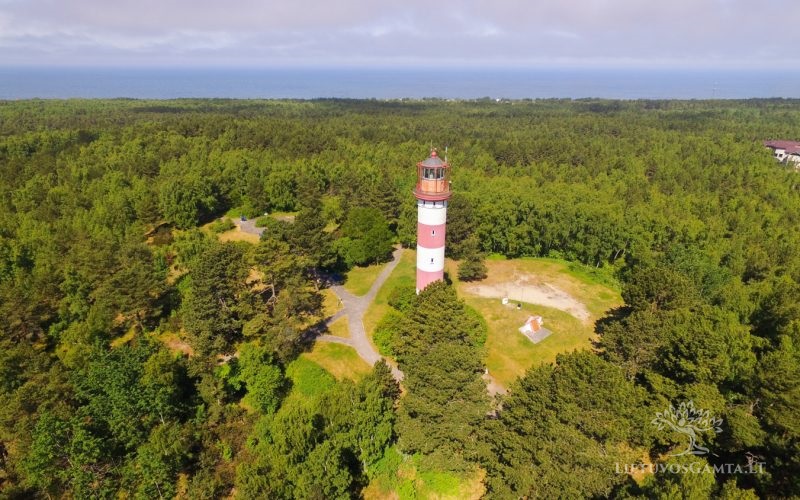 The green dune, densely overgrown with high pines and referred to as Urbas Hill got its name because of its unusual top. There used to be a sand hollow. Thus, the hill was given the name of Urbas, which means ‘a hole in the ground’.

Only 200 years ago the 52 m dune was completely bare, almost without a single plant. The entire hill was covered in sand, brought by the wind. As the dune slowly crept forward, the moving sand started posing threat to Nida town. George David Kuwert, Manager of the Postal Station at that time, kept thinking what should be done to save the postal road from being buried under the sand. It was decided to reinforce the dunes and stop the moving sand using plants. The Manager of the Postal Station purchased saplings and took up the planting works with the help of his son.

Urbas Hill was the first dune on the Curonian Spit to be planted with saplings. The work that they’ve started is continued by foresters, planting mountain pines. In order to help the plants to naturalise faster, they put lagoon sludge in all plant holes.

When David Kuwert died, following his will, his family buried him in the cemetery, established among the saplings of his planted forest.

The bright lighthouse of Nida shines on the green top of Urbas Hill like a guiding star. The first lighthouse was built here in 1874 of red bricks. Later it was destroyed by the Nazis. What remains to this day is only the stairway that used to take to the lighthouse. The stairway of approximately 200 steps was built by prisoners of war during the construction of the lighthouse.

The reconstructed lighthouse of the modern day is a bit different from the first one. During the dark hours it sends a signal to sailors in the sea. The two short flashes of light nearly every 6 seconds mean that there is no port in this location. The total number of lamps in the lighthouse is 6, but only one of them works. Should it burn out or something, another lamp would automatically take over the sending of the signals to the people at sea.

The top of Urbas Hill offers extraordinary views. On one side you can see the Baltic Sea and on the other – the Curonian Lagoon. In summer people gather on this hill for movie nights. St John’s celebration march every summer starts on this hill as well.