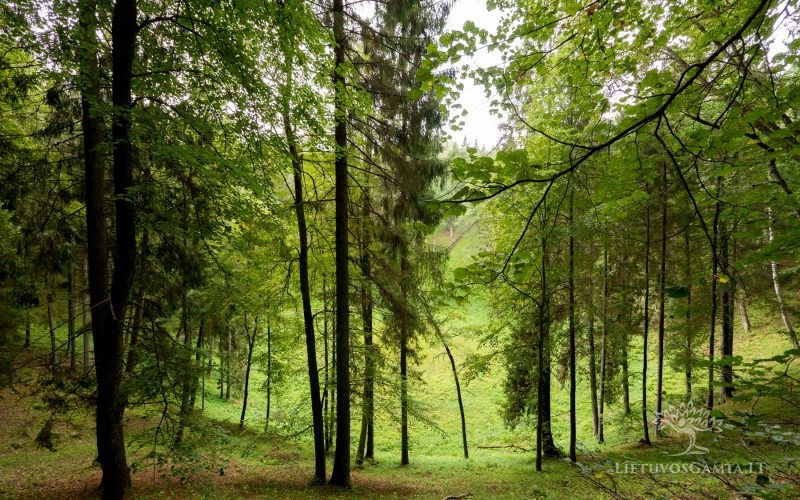 Devil’s Hole has the status of a mythological and sacred heritage site. A legend has it that a church used to stand on a hill. A by-passer caught sight of a priest entertaining himself with a girl.  He poured out his indignation: ‘Let the earth swallow you!’ No sooner he said that, when the priest with the girl went down the earth. When the hole was filled with some water, people with strong eyes could see the spires of the church in water. Decent people still can hear bells ring at the bottom.

Others claim that the church went under the ground owning to an improper ritual. A corrupt person lived in the area and he fancied a girl. He wanted to marry her, but he already had married another woman and could not be married by a church ritual once again, yet the girl would not agree to marry him otherwise. They both went to the dean of the church. The man brought out a sword and threatened the priest reluctant to marry them. When he started uttering the sacramental oath, the church sunk into the ground carrying all three of them.

A brand new bell may be buried in the depth of this hole. Horses were carrying a bell to a newly built church of Užugostis. While crossing the forest, a carriage wheel slipped of the axis and the bell rolled down into a deep hole.  Another bell was later installed in the church instead of the lost one.  When it rang for mass, the one from the depth of the hole would accompany it.

The hole received its name when locals started observing the tricks played by the devils. Earlier shepherds would find crosses cast away by devils. Occasionally cows stepped into the quagmire of the hole and were carried into Škilietai Lake. At night, passers-by could hear someone shout. All this was devils’ work and the place received its name of Devil’s Hole. At midnight devils partied, therefore nobody dared pass by after dark.

A shepherd was tending his herd and did not see how a calf slipped into the hole and disappeared. Later they found him swim in a lake nearby. Now the lake is called Atveršis (Calf Lake).

Scientists have included Devil’s Hole in the region of Trakai among one hundred of the European the most strictly preserved monuments of nature in Europe. This 30 – 40 meter hole in a shape of a funnel was formed with the movement of glaciers. A huge block of ice was buried under a thick layer of deposits and sediment. The ice melted as climate warmed, leaving a hole in its place. Others say that the hole was shaped by a stream of melting water falling down with great force, or that it opened up after underground waters washed out the soil. There is even a story about a huge meteorite that fell down and shaped this huge dip.

Whether it was a meteorite, or a piece of glacier, or a church, they must have been quite sizeable. It covers an area of 4.5 meters. Looking down, it is 40 meters deep. Deep inside, at the very bottom of it, under a 10-meter-layer of peat, there is a little marsh.