Bispilis Mound with a settlement 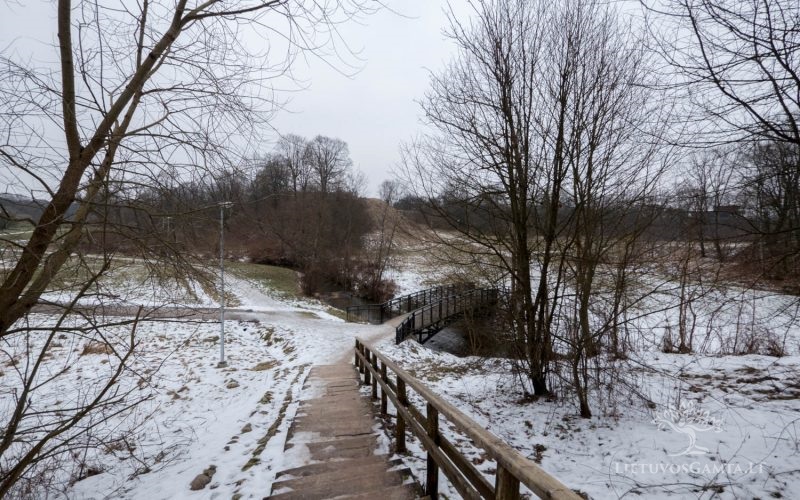 A beautiful hill of Bispilis castle is situated in Jurbarkas on the bank of the River Imsre. People remember that two brothers giants Jurgis and Barkus lived once. Jurgis lived on the right side of the River Nemunas, and Barkus – on the left side. They used to throw an axe to each other in the morning. Jurgis died when his head got hit with an axe that was thrown by Barkus. After a while Barkus died too because of great sorrow. After the death of the giants a grave named Bispilis was built in their honour. A city started developing around the Grave of the Giants, and was named Jurbarkas after both brothers.

For this reason, the locals often call the hill simply Jurbarkas.

According to the legends, there is a long forgotten and cursed manor under the hill, and an ordinary man became a witness of this fact. People say that the man carried ten centners of oat to the market for sale. This happened on a rainy autumn day. The man tried to sell oat but unsuccessfully. This was because he arrived too late, there were very little sellers left, the buyer had already bought the products they needed. The man got very upset: he needed the money, but nobody bought his oat. […] After having travelled about three kilometers from Jurbarkas he saw a man on the road. The man he met on the road not only bought all grain, but to the oat seller‘s surprise also paid more money. The buyer asked the seller to give him a lift in return. […] After a short ride there was a manor I have never seen before. The manor was not far from Jurbarkas. I drove in that manor through the door of the yard, instead of the gate. I got scared: there were troops, soldiers sitting on the horses. Ahorse. I was told to drive my carriage in the middle of a narrow path. I emptied my carriage, then was paid money for oat, and put the money inside the pocket. The mysterious residents of the mound gave three rolls to the man in return and let him drive home. The horses brought me home. I entered the yard of my home. Where I have been? I drove along the River Imsre. I am sure that the manor is Jurbarkas Mound. The old people say that there is a cursed sunken manor inside the hill. Maybe it is exactly that manor where I have been today. The man wanted to give the rolls to his children. […] But he found no rolls in the pocket but only three pieces of horse manure instead and a dirty pocket!

The hill is also called Vispilis or Viespilis. The old people remember Kolainiai castle that stood here in the 13th century, and a settlement in the foothill of the mound. The fortress was once attacked by the Teutonic Order. But Lithuanians, who were led by Surminas, knew then how to defend themselves against the enemy. There has no one left alive to tell why this happened. But one year after the victory the fortress was abandoned by its hosts. The Teutonic Order has burned the castle to prevent Lithuanians from returning to this land. Fire completely destroyed the castle leaving no traces of it: only arches or crossbow arrows reminiscent of savage battles have survived into the present hidden under a thick layer of turf. And some fragments of pottery made with help of a rotating pottery loom. These fragments are of clay bowls that were used to serve a calorific soup for warriors before the battle!