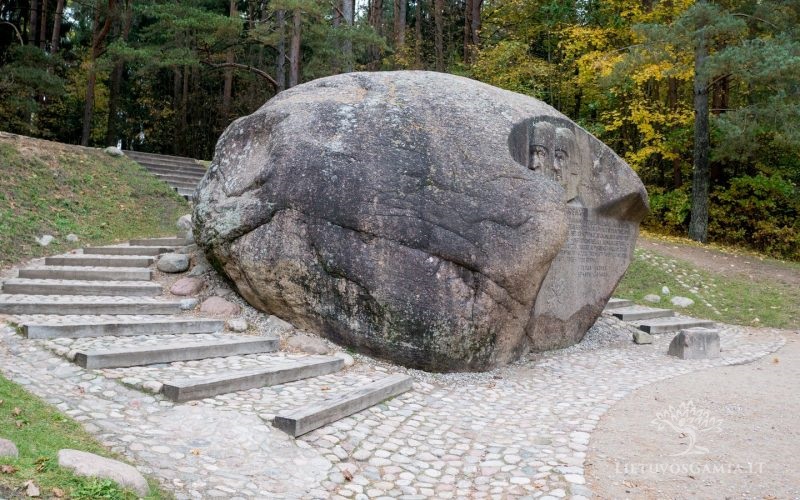 The best known stone in Lithuania, – Puntukas stone. Because of its amazing massiveness, the boulder is shrouded in many legends. It is said, that at the beginning of the world, the main task of the devils’ was to carry stones, so the wicked ones dragged Puntukas to Anykščiai.

The people of Anykščiai parish built a beautiful church on the devils’ road and they were not very fond of it. So the devils decided to eliminate it. One of the devils found a large stone in the fields, rolled a haystack, wrapped it around the stone, lifted it on his shoulders and carried it to block the doors of Anykščiai church. While carrying the stone, he heard a rooster crow: the stack made of hay snapped and the stone rolled off from his shoulders. Being scared, the devil ran away leaving the stone in the field. That stone has stayed there since. The place, where the haystack was wrapped, has a little indentation.

The devils enjoyed carrying the stones. They would even load some to a bag, so they could carry more. But the most important thing – they had to do their work before the rooster crowed.

When the devil was carrying it [Puntukas], the rooster crowed, so he dropped it six kilometres from Anykščiai, – couldn’t carry it to Anykščiai. He wanted to obstruct the church of Anykščiai.

Though there is a different story of how Puntukas appeared. A legend, which says that Puntukas was supposed to be used as an altar at the church. And that the ones who carried it, were people, not devils.

People tell about the piece of the Puntukas, which was once split by the Christians, that when building the first church in Anykščiai, the half of the stone was supposed to be a foundation of the altar, but when moving it, one man lost his thumb, another had his leg broken and once it was brought to the Šlavė river, halfway, all the horses have died. After so many accidents, people were too scared to carry it further and just left it halfway to Anykščiai.

No matter the real story, Puntukas didn’t destroy the church of Anykščiai. And it’s lucky that the devil lost it there. Now it’s one of the most visited stones in Lithuania, with Steponas Darius and Statys Girėnas bas-reliefs etched in it.

The Puntukas looms 5 km to the south of Anykščiai, on the left river bank of Šventoji river, at the Anykščiai Pinewood nature protection area.