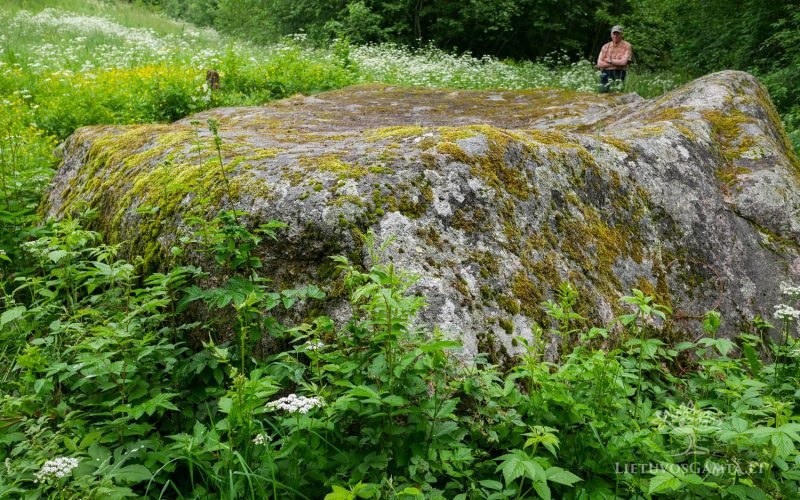 If you happen to be near the stone after dark and you stay really quite, you will be able to see dancing devils, witches binding brooms or pixies brushing their long hair on it. Once upon a time one of those pixies accidently stepped on the stone when haunting and thus left her footprint on it. This stone looms near the place of worship so called “Daubos Kūlis” in the district of Kretinga. The old ones named this stone “Laumės (in English: Pixie) Kūlis”, since they often used to see her haunting around the stone.

Along the stone the river Alka flows, and by this river there is the Alka hill. People say that this is exactly where this soul emerging from the stone used to go. The passers-by used to see ghosts near the stone at night. A small light used to appear out of the hollow from the stone and move towards the Alka hill late in the evenings.

A stone has always signified the line between the living and the dead. Stones rolled on the graves protect the living so that the spirits of the dead would not disturb the tranquillity of people. The old ones believed that if the spirits of the dead tried to escape and managed to get through the earth they would definitely be stopped by stones. And that’s why they keep haunting around the stones.

Natives also used to call this stone “Pirties (in English: sauna) kūlis”, because once there used be a sauna set up on the top of this stone, in which all the local wenches and children used to fit. The sauna used to be prepared on Saturdays after all the day’s works, and when the weather got warmer, the stone used to become a gathering place where local people used to celebrate the May feast, dance until the dawn and sing love songs.

“Daubos kūlis” of 8,5 m of length, 6,5 m width and almost of 2 m of height can be seen from afar in the village Naujoji Įpiltis, which is barely half a kilometre after turning off the Kretinga-Skuodas road.