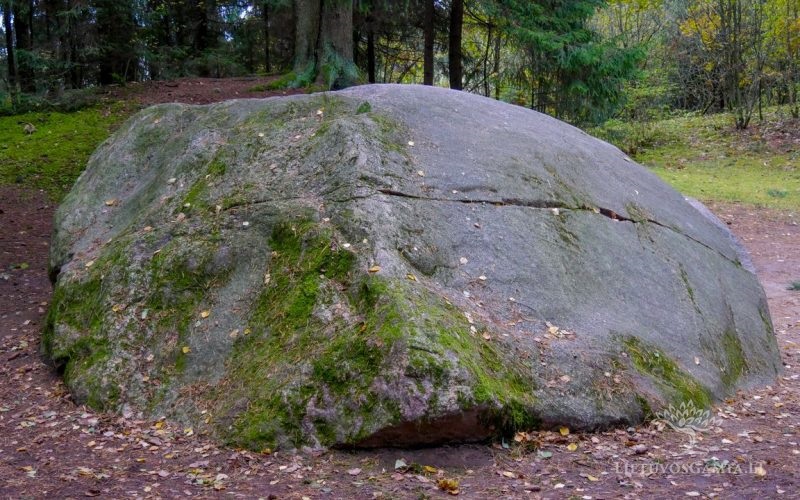 Stop. Listen. Do you hear the story silently told by the old one? Not many know the history behind the origins of Puntukas‘ Brother. Being a live person once – having loved, laughed and cried, was cursed and turned to stone.

Once upon a time lived two brothers, who brought the disgrace of the Perkūnas on themselves. For that he turned them to stones and cast one of them deep into the forest, where no one would find him.

It is said, that once the world ends, the stones will come alive, will turn back to people. But for now, their souls can neither return to earth, nor pass to the afterlife. The elder tell the story that an ancient Lithuanian shrine was near this stone. The mysterious nature of the Puntukas’ Brother, people say, that it just dropped down out of the blue sky…. One morning people were waking up and were doing chores around the house, when they heard something loud, as if the thunder was rumbling. Everyone got scared thinking that the end of the world came. Once everyone got outside, they saw a giant ball of fire falling from the sky. Conquering their fear, they went to look and saw an enormous stone. Falling heavily, it went deeply into the ground and only a small part of it was left on the surface.

The length of the stone reaching up to 5,94 m, width – 4,7 m, highest height to be seen reaches up to 1,85 m, and the largest size – an amazing 18,57 m. You can visit the Puntukas’ Brother halfway between Ažúožeriai ir Anykščiai, near the Šventoji river.