Pypliai Mound of a mound with a settlement 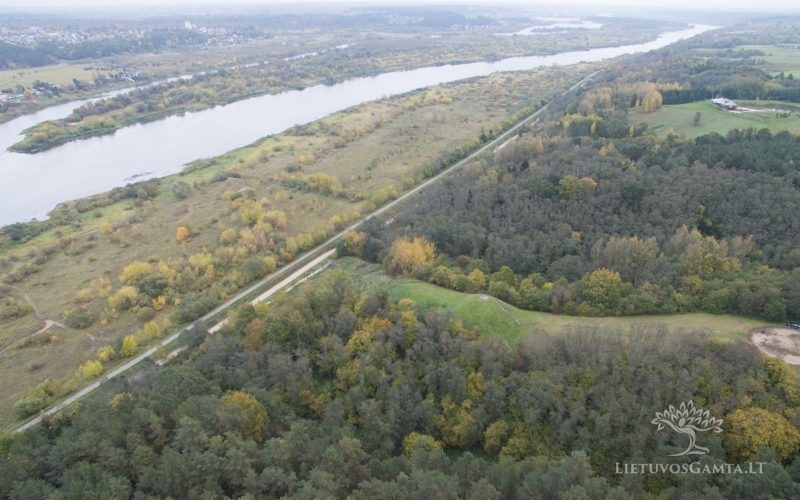 Pypliai Mound is a historical hill that is situated between two hollows. The hill is surrounded by the lush Kacergine forest. In the past centuries the hill that stands close to the River Nemunas protected and defended the dear lands of the Grand Duchy of Lithuania against the Teutonic Order.

According to the people, the mound was built by the Duke Pyplys in honour of his beloved fallen son who was a military hero. It was believed in those days that the young soldiers buried in the grave had to become the trees. Others say that Pypliai Mound was built by French people who brought a soil to form the hill in their hats. Treasure hunters should also find the mound to be interesting: some people say that once upon a time someone has buried a pot of money inside the hill. However, nobody is to search for the treasure because, according to the ancestors, the one who will find it will face dreadful disasters. And there is no wonder about this because according to the old people many wicked glimmers wondered around on Pypliai Mound in the old days. According to others, there once was a hole in the hill, and there was a castle of Lithuanians in the hole. The castle was burned down by the enemies when the Duke who lived in the castle left to the war.

Pypliai Hill, on which a wooden castle stood, is the reminder of the greatness of the Grand Duchy of Lithuania and of the battles against the Teutonic Order. Today the steep slopes of the hillock are levelled, the top of the hill is decorated with a knoll that has survived into the present. The knoll once served as a point of observation and enemy tracking.

If we only had an opportunity to take a glimpse into the past, we could see a site of the mound surrounded with a steep log fence, and the houses of the guards of the castle standing nearby.

In the early days of the Grand Duchy of Lithuania, in the 13th-15th centuries, there was a settlement situated close to the castle hill that had a status of the royal settlement. Postholes, camp residues, a fireplace, the specimens of pottery with a dashed, rough and smooth surface, and the specimens of pottery made with help of a rotating pottery loom, all of them the witnesses of the greatness of the settlement, were found under a turf of the current Pypliai village. If you will ever be passing through Kaunas, you should visit Pypliai village that is located not far from the city.