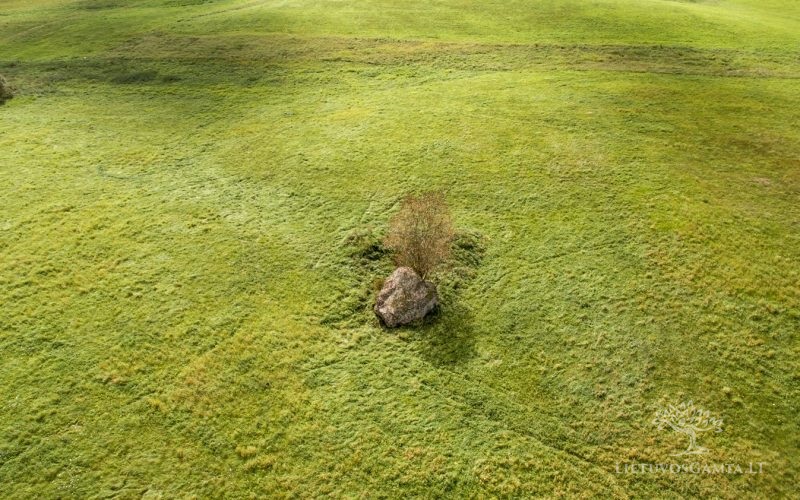 In the ancient times people used to assign various purposes to stones – some of them were used for household purposes, others – for building temples or altars. Simple and unremarkable “work” stones were used to consolidate the foundations of the house or for paving.

A similar fate awaited the Stone of Mindučiai. However, it is one of those even the most powerful machinery couldn’t move out of its place. Once even 5 powerful tractors so called “Staliniečiai” tried to drag the Stone of Mindučiai to the side of the road – one of them pushed and four of them pulled it bound by marine chains, but the stone just wouldn’t give up and so it remained standing in the same place it stood probably for several millennia.

Quite often stones might look deceptive and so not once have fooled by their size. When you see only the surface of the boulder, it’s really easy to believe that you can move it.

They wanted to build a road where the stone is; so they needed to unearth the stone. The more they dig, the wider the stone went. So they didn’t dig it up. And they left it – built a road farther from it.

This stone amazes not only by its weight, but by its appearance as well. Oval cone-shaped stone of greyish granite is extremely huge. It is considered that the weight of it might be up to 120 tons. The older ones say that this stone was completely underground until 1976.

This is the biggest stone in the district of Molėtai. Its height and width is 3, 10 cm, the length – 5, 70 cm. The locals call it the Stone of Žvinys Jonas, since the latter one is the owner of the nearby mansion, and the stone looms on his lands.